Who Do You Trust?

There is so much to say about 2020 thus far. From wildfires in Australia to the pandemic, economic fallout to calls for racial justice — the year has been fraught with loss.

In times of uncertainty and concern, who do you trust?

According to an article published in The Chronicle of Philanthropy earlier this month, 70% of Americans have strong confidence in nonprofits’ response to the pandemic, sharing that “Americans have grown more confident in nonprofits, and they now trust them more than they do state, local, or federal governments.”

That is a strong statement of support, and the data on giving confirms it.

Nonprofits are uniquely positioned to address the human and financial toll created by the coronavirus. While the government certainly has a major role in public health, it is the nonprofit sector that is testing, treating, healing, caring, feeding, housing, educating, training, and supporting all those impacted.

And, the response has been swift. Nonprofits of all sizes pivoted to adjust their operations and redeploy their resources to meet the unprecedented challenges.

Nonprofits can only do that when the donor community stands with them as partners. While volunteering has not returned to pre-pandemic rates, according to the article, the level of giving to areas of greatest need has continued.

The article shares findings that donor behavior since the pandemic has held steady for social service agencies, faith-based organizations, and health clinics and hospitals. However, organizations in the environment, education, and arts and culture sectors have received less in the same timeframe. 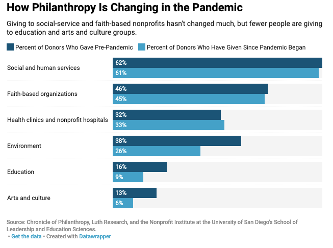 While the national data is intriguing, we can look locally to the response last week of The Columbus Foundation’s two-day giving rally, The Big Give, where donors gave more than $32 million dollars in 32 hours to 1,107 nonprofits in Central Ohio.

The donor response was as unprecedented as this year has been.

There is much to say about the generosity of donors, but one statement stands true: They trust nonprofits to fulfill their missions and impact the community.