Remembering Veterans and Telling Their Stories.

“The story of service” is at the heart of the new National Veterans Memorial and Museum, as told by a veteran in a video created by CNN.

The National Veterans Memorial and Museum, located on the riverfront in downtown Columbus, is remarkable for many reasons.

First, it honors those who serve in every branch of the military rather than the specific wars that compelled their service. It is the first institution to recognize the heroism of ordinary Americans called to extraordinary sacrifice, whether by draft or as volunteers or in times of peace. It is a powerful testament to the brave men and women of all backgrounds who defended, and continue to defend, our collective freedom.

Second, the building itself is a work of art. The Associated General Contractors of America named the building as “the most significant construction project of 2018” and Architectural Digest called it “among the most important buildings to be completed” in the world last year. The New York Times said it was “an arrestingly beautiful building, a spiral that seems to spring from the ground… Its design facilitates reflection, even more than education.” 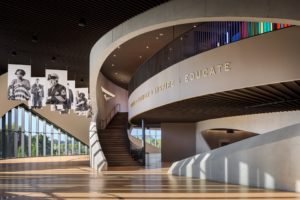 Third, the National Veterans Memorial Museum was the vision of the late senator, marine, astronaut, and Ohioan John Glenn. Of all the gifts Senator Glenn gave to his country, all the trails that he blazed, this will be remembered as a lasting testament to his service and leadership.

We can think of no better way to spend Memorial Day than at the inaugural ceremony to be held on the museum’s rooftop terrace this Monday. I look forward to the solemnity of the service. With a grateful heart, I will remember my father and all veterans who have gone before us.

How will you honor Memorial Day?