The Ins and Outs of Succession Planning — Part One

This summer, we’ve had the pleasure of working with a client on developing a succession plan for their organization. We present the final succession plan to the board this week after months of strategic conversations. It has been a joy to work with this client, as their board and chief executive have been thoughtful and engaged throughout the entire process.

This scope of work began when a board member for the organization approached me after a speaking engagement about board governance. She said she had an a-ha moment during the presentation.

For years, she said, the board asked the chief executive for a succession plan during her annual review, but it never got done. She never understood the role of the board in that work, and the board governance conversation was a complete re-frame for her.

That misunderstanding is common. Boards often tell chief executives to come up with their own plan or to identify a person to succeed them; however, hiring, evaluating, and supporting the chief executive is a fundamental responsibility of boards. Building a succession plan is strategic and essential for good board governance.

Another misconception is that a succession plan equates to a search and/or that a search is imminent. While a search is needed when a transition occurs, succession planning should happen when leadership is stable, which is the best time to make decisions.

We refer to this definition of succession planning from the Chief Executive Succession Planning Essential Guidance for Boards and CEOs by BoardSource:

“Succession planning reflects an ongoing, continuous process that boards (with the help of their chief executive) implement to:

The following chart illustrates the differences between succession planning and transition. 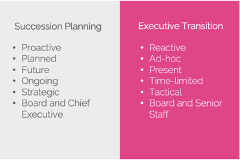 The plan that our client’s board will approve is a document that will be reviewed each year by the board chair and chief executive to determine if it is still accurate or if changes need to be made. This intentional process will ensure the plan is able to be executed no matter the scenario for executive transition.

In next week’s column, we will explore those scenarios.